What is TikTok and should I be using it for my business? Valued at $75 billion, and boasting over 500 million active users, it’s hard to ignore new kid on the block ‘TikTok’. It’s the video-sharing app that's the talk of the town, or at least, the talk of everyone between 16-24.

So, should we, as marketers, be worried?

While the young are obsessed, the old are befuddled. And me? I sit somewhere in the middle. While I’m fast approaching 30, I 'get it' to some extent, but I'm still trying to understand the nonsensical lip-syncing videos that flood my newly downloaded TikTok feed. At the moment, it’s just highlighting a cross-generational friction.

I figured most of you probably sit in the same camp, with the same questions as me. What exactly is TikTok? Do I need to worry about it? Should I be on it? And will it help my business?

In February 2019, TikTok exceeded one billion installs across Apple Store and Google Play. TikTok is geared towards creating, editing and sharing short, looped videos of 15-60 seconds and it's been referred to as 'the closest thing we have to Vine'.

Since Vine was overtaken by Instagram and subsequently died out, what makes TikTok so special?

Some argue that it's actually nothing like 'Vine', it's something completely new.

In short, it's weirder, it's more collaborative and more creative. Users have access to a whole host of functions and features that allow them to craft their own comedic, thought-provoking and often viral content.

Owned by Chinese tech firm ByteDance, the app allows you to record, edit, and share short, looping videos with musical overlays and it's been described as 'Karaoke for the digital age'.

There's also a function to create split screen videos when collaborating with other users or replying to other videos, which ultimately promotes the same sense of community as other social media giants.

Who is using it?

It's not uncommon to see users' parents crop up in videos as well as creating their own content (which seems to be doing pretty well).

TikTok is of course, popular on its home turf of China, with 250 million monthly active users. India, Japan and Thailand also have huge user bases.

The app also has a strong following of celebrities, comedians and reality TV stars who have all taken to posting funny, viral videos that get them noticed and followed internationally.

If you're considering downloading the app, right now, I would do so simply for the purpose of familiarising yourself with the platform. It might not yet be relevant enough to start throwing your marketing budget in the direction of 'memeable', viral, and at times, pretty odd video content. Get to know the platform first and its functions, and if things start to grow even more, you'll be ready. I’ll admit I was a little confused and overwhelmed at first, but what good is a closed mind when it comes to the social space?

Get involved now if:

Just like you can ‘borrow’ features and filters from Instagram for your Facebook profile picture, you can create content in TikTok using the stickers, features and music, save and share on other platforms where appropriate. Just the pure fact that you’re surfing the trend wave could be enough to convince potential customers that you’re relevant and help to build a rapport with prospects who value relevance and authenticity.

What about for my business?

The Chinese version of the app is currently selling splash and newsfeed ad placements and is reportedly signing contracts with influencers in China.

Brands already using TikTok include Apple Music, Nike, Samsung, BMW and Guess Denim. At present, the best way for a brand to  get noticed or go viral through the platform is via 'Hashtag Challenges'.

BMW introduced '#The1Challenge' via the platform, where they encouraged users (particularly influencers) to create and post entertaining content dancing in or around their new cars to generate excitement about the release of a new model.

Meanwhile, Samsung promoted the release of their Galaxy A smartphone using a hashtag challenge. 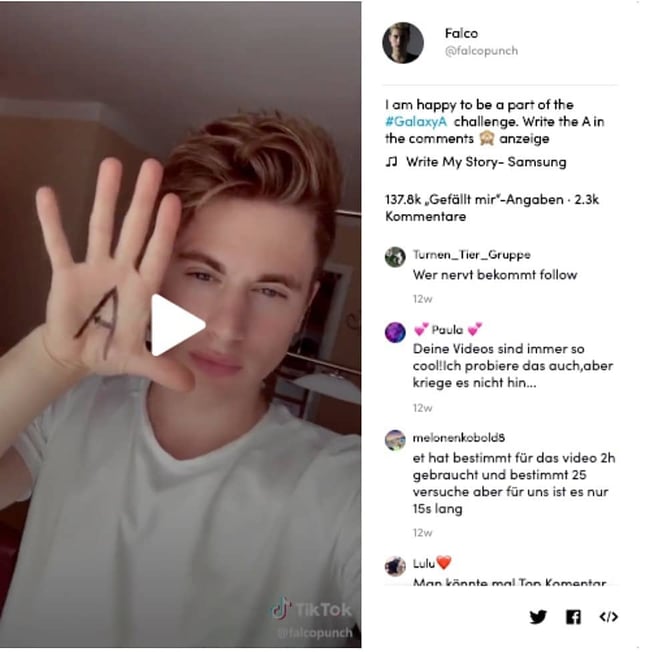 The challenge encouraged users to draw an A on their palm of their hand and 'transport' the A to another user using the app's video transition effects. The message being that the new smart phone helps people to connect.

And yes, these are predominantly B2C brands, but we must remember that once upon a time this was also the case for Facebook, Instagram and Twitter.

If your business relies on the work of influencers, it might be wise to consider the platform to some extent, but tread carefully in these early stages.

The app is proliferating rapidly and teenagers tend to be ahead of the curve, especially with what's going to be the next big thing. Stay aware for now and watch out for new features and audiences that can be leveraged for the benefit of your business. As it stands currently, the app leans more towards younger, adolescent users as a funny, creative outlet. But with the rate at which it's blown up it's one we can't ignore. It will always pay to remain curious and inquisitive.

So don’t stand for the ‘Ok boomer’ slurs. Know your stuff and shock your audiences (and your kids) with your newfound knowledge of the 'next big thing'. 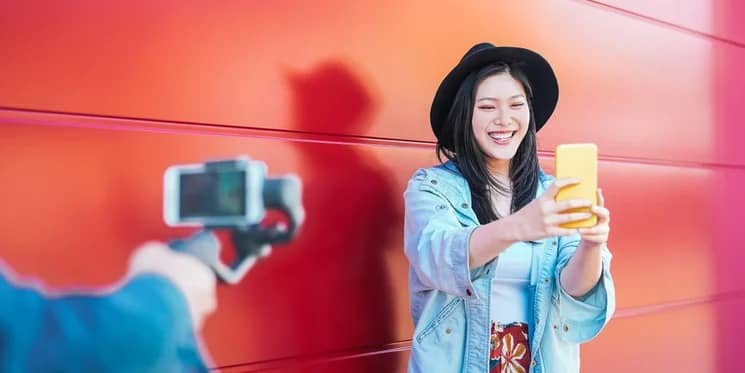