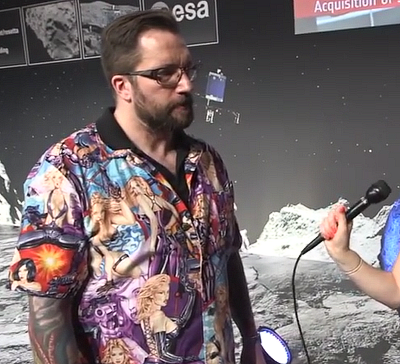 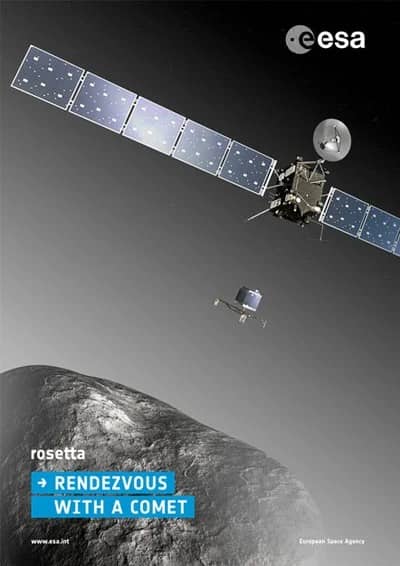 Unless you have been living in a cave recently, you cannot help but know about the outstanding achievement of the European Space Agency (ESA) in landing a probe on a comet speeding through space, more than 300 million miles from Earth.

The Rosetta mission is the result of collaboration between teams of 50 contractors in from 14 European countries and the US, and British high-tech space industry companies* were used to build many of Rosetta’s systems.

Rosetta is a ten year mission which launched in 2004, and was woken from hibernation mode earlier this year. Then in the past week it’s lander – Philae – left Rosetta and landed on the target comet 67P/Churyumov–Gerasimenko.

You may have heard it in the news, in the papers or in social media – or in all of these. And although it is a major news story, the depth of impact and the nature of the story that’s being told is the result of a great marketing campaign.

So how does a box of high-tech hardware grab the World’s attention? Here are ten B2B social media lessons we can draw from this success:

First and foremost the comet landing is a big event, and events in the real world have long been the best way to generate interest for PR and Social Media.

Events are something around which campaigns, content and engagement can take place.

And landing on a comet is definitely a unique event – if there is something that makes your event unique, like content, format or location, it makes for an even better story.

From the smallest start-up to the largest corporate, an event that people can talk about is something any size of company can organise.

Science and technology can be incredibly complex – companies selling technical products and solutions are often so familiar with their product they forget this and talk technical from the start.

Most buyers are high-level managers who want to know the benefits first. If they are sold on the product, then they will get their techies to talk to your techies.

So take a lesson from the ESA and keep it simple.

They started with the concept – the vision – and produced a mini-movie called, suitably, Ambition. It stars Game of Thrones' Aidan Gillen and actress Aisling Franciosi as master and apprentice on an alien world. “Think of it as a seven-minute trailer to a 20-year mission.” says Mark McCaughrean, senior science adviser at ESA.

A good infographic on a product or service can communicate a great deal of information clearly and in an engaging way.

4) Provide plenty of technical stuff behind the main story

And for those who like the complication and technical details, blogs and articles covered every aspect of the Rosetta Mission, the Philae Lander and the science of the comet landing.

Keeping it simple doesn’t mean don’t do the technical stuff – just don’t start with that – have it available for the clients whose techies want to qualify the product. Think multi layers – like an onion – allowing anybody to go as deep into the details as they feel comfortable with.

The ESA made sure that there were plenty of freely usable images of Rosetta, Philae and the target comet, releasing new pictures as they received them, creating an appetite for the latest photos. So if someone wants to blog about your product, campaign or event, make sure there is plenty of material for them to use. We live in a visual age – a blog or a social media post without an image is barely noticed, so it’s essential to have good images and plenty of them.

6) Focus on the benefits – not the product

One thing that the European politicians and administrators were keen to stress throughout the Rosetta mission was the benefits to science and to our understanding of the Universe. (There is a theory is that life itself came to Earth on a comet – so the mission’s aimed at some pretty fundamental stuff).

Marketers should always focus on the benefits that using the product or service brings to the user, how it can make their life easier. Too often technical products focus on features, on version upgrades and on improvements that mean nothing to the potential buyer. “Why should I buy this?” “How will it help me?” – these are the questions to answer with marketing activity.

7) Tell a story and create tension

Good content creation for blogs, social media and marketing material relies on telling a story. It doesn’t have to be straightforward – overcoming adversity as part of a product or service journey is a great tale.

Before it left the Rosetta spacecraft, the Philae Lander’s thruster – which was designed to hold the lander against the comet – had malfunctioned. The team knew it was not going to work, but they went for separation anyway. There was now a real danger that Philae would just bounce off into space, as the comet had almost no gravity.

During the blind descent, anxious hours passed and then signals sent back revealed that the harpoons meant to secure the lander to the comet had failed to fire, but nevertheless, telemetry confirming a landing was being received. The lander was down. Then it transpired that the Lander had actually bounced – twice – and it had very nearly bounced off into space.

Finally it had come to rest some distance from the initial planned landing spot, tilted at an angle and where it couldn’t get enough sunlight to properly charge its batteries. Despite this, experiments and the collection of data were able to continue.

Then in the end it became a desperate race against time to transmit all the scientific data it had managed to collect before its batteries ran out.

If you followed the landing in detail it was a tense nerve-wracking story with a happy ending.

Struggles and pitfalls create engagement – so don’t be afraid to tell a warts’n’all story. If it had been smooth sailing for the mission, the story would not have been so gripping or grabbed people’s attention quite as much.

8) Anthropomorphise the product or service

Another clever trick that the ESA learned from the NASA Mars rover Curiosity (@MarsCuriosity) is to anthropomorphise the product – treat it if it were a person or an animal.

By tweeting in the first person the Curiosity Rover Twitter account made people care about the mission and communicated the basics of the mission in a very direct way.

The Rosetta team took this further – starting with some great, friendly branding, they produced some animated videos to tell Rosetta and Philae’s story.

And they also had a Twitter account for both the spacecraft Rosetta (@ESA_Rosetta) – and the lander Philae (@Philae2014), and set up touching conversations between them. Such was the power of this simple device, many people were genuinely sad when the team finally lost contact with Philae.

Many brands have used this technique, think of the Michelin Man, Frosties Tiger, Churchill’s dog, Pillsbury Doughboy, Duracell’s bunny, M&Ms and once again – that meerkat – the list is a long one. Giving your brand a personality or a mascot is a powerful way to connect an unfriendly or technical product with non-technical people – even more so in social media where personalities are paramount.

And as we’ve seen with Rosetta, it’s a great technique when your product is just a box of technical hardware.

9) Get the basics right

But none of this will work if you don’t get the basics right – For Twitter the ESA came up with a simple hashtag: #cometlanding.

At one point tweets with this one hashtag alone were being created at a rate of over 50 tweets a second. (Tweets about all aspects of the mission would be many, many factors higher).

Always create hashtags for your social campaigns and plug into relevant hashtags when posting generally. Try and keep the hashtag as simple as you can, but do some Twitter searches first to make sure it is reasonably unique.

The mission has its own Facebook page, a number of Flickr accounts for all the latest images and set up a live video stream of the control room during the landing phase.

The Rosetta mission also has a great blog where every aspect of the mission is discussed and latest images posted along with a dedicated area on their website for the Rosetta Mission (and indeed all their main missions) making finding information easy.

They made use of every practical social media channel they could and used each for its strengths. 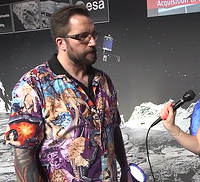 Unfortunately, as scientist Matt Taylor found to his cost, a simple error of judgement can lead to a derailing of the main message.

He wore a Hawaiian shirt in an interview, which some considered inappropriate and that issue became a major talking point for social media.

Try not to say or do anything, which distracts from the campaign message; in social media in particular, little details have a habit of becoming big stories.

The Rosetta mission carries on of course, it wasn’t just about landing Philae on that comet – there are years of scientific observations still to come. But the way the ESA have marketed and publicised this technical mission is not only clever, but comprehensive. Whilst the human race will learn a great deal from the science of Rosetta, B2B marketers can learn almost as much from its marketing.

*The UK is recognised as a world-leading designer and manufacturer of space hardware and vehicles, with the sector employing more than 28,000 people in businesses which combined generate an annual turnover of £9bn.