Why marketing needs to be done by humans not bots 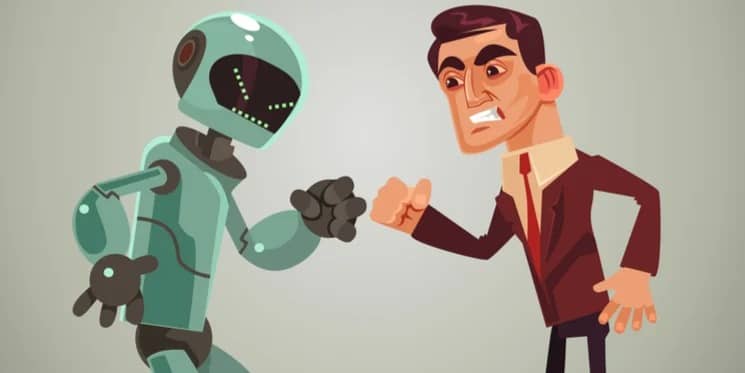 This year there has been a lot of talk about marketing automation, programmatic marketing and artificial intelligence, with promises of streamlining the marketing process and making it all more efficient.

With robots replacing jobs in manufacturing and with automated machines at the checkout and selling tickets at railway stations, with driverless cars on the horizon, and with chatbots being used to handle customer support, how worried should we be about our future as a human being working in marketing?

To get people interested in your product or service, to engage with you, and ultimately for you to sell to them, you need to appeal to people’s emotions, and be aware of them throughout the buyer’s journey and even when supporting customers after the sale.

Because emotions are such a subtle combination of small clues transmitted in a variety of ways, they are something that computers have always had trouble reading and processing.

And even when you understand someone’s emotions, responding appropriately requires a level of empathy that only humans are capable of. (Though not all humans – just think of Sheldon Cooper in the Big Bang Theory!)

Dealing with customer complaints, where emotions may be running high, is going to a particular challenge for computers, and may well be beyond their capabilities for years to come.

So much of marketing is emotive, it is hard to see a scenario in which robots or automated processes could completely take over the communications role of marketing any time soon.

Emotions and feelings are often communicated through language, using subtle word modifiers or emphasis. Words can have different meanings depending on the way they are spoken and the context they are presented in. Even different nations that share the same language can have trouble picking up on emotional cues. It can be particularly hard for non-native speakers to pick up all the arbitrary and illogical variations in English for example, and that is even without adding slang and technical terms into the mix.

Machine analysis has been used to analyse social media posts and tag them with sentiments, but accurate results have proved elusive. You need a term for which you are tagging for – usually the brand or product/service name – so you can search and look at posts where it is mentioned. But then you also need to fully understand the context in relation to that – and that is a much bigger issue.

For instance, take the sentence, “It’s no good trying to buy product X from Z company as they are out of stock.” A computer might look at the word good in relation to the product and conclude this post was positive towards the product, or it might consider the phrase “no good” and assume the post was negative. The truth is, it is neither positive or negative toward the product itself. A human eye would see that, but might also see that this actually raises an issue of product availability, not what you are looking for, but useful information nonetheless.

Just to confuse matters, slang inverts meanings so bad and wicked can mean good, and sick can mean excellent or awe-inspiring. On top of that, there is the ironic use of words, the sarcastic use of words and so on. So, to date, most machine analysis of social media posts has been somewhat unreliable, and the best sentiment tagging is still that processed by humans.

Obviously, the software associated with voice assistants is getting more and more sophisticated and capable – but you still need to keep things simple in order for Alexa, Google Assistant, Cortana or Siri to understand you.

What’s interesting is that in spite of the industry hype predicting their universal use, what voice assistants are actually being used for is quite underwhelming.

Chatbots are also being developed with increasing levels of usefulness – but currently, they too are limited to basic conversations.

It looks like it may be some time before computers can understand everyday sales queries, comments and customer feedback.

So far, true artificial intelligence is still in the realms of sci-fi movies like Lucy, Resident Evil, Transcendence, Terminator and 2001 A Space Odyssey. (Which may be just as well according to the views of the late Professor Stephen Hawking, Bill Gates and Elon Musk. Although Bill has since changed his mind – perhaps because Microsoft is heavily invested in AI?)

So, although these algorithms can perform incredible and useful tasks – they are still mindless routines, throw them a curve ball and they wouldn’t know what to do. An intelligent human, on the other hand, would be able to adapt and come up with a solution.

Much of marketing requires a great deal of strategic thinking and flexibility – being able to respond to fluid situations and markets rapidly. Indeed, this is so prevalent that agile marketing has been developed in response to this. All of which leads us on to the next factor.

One area where we definitely have robots and computers beat (at the moment) is creativity. So much of marketing relies on creativity; from strategy and planning to blogging and content creation. Ideas for campaigns, social media posts and marketing collateral.

Whilst many jobs may be ripe for replacement by robots, creativity is one of the main areas still pretty much safe from mechanisation.

You can’t get rid of marketing

So there are four reasons why you won’t be replaced by software, computers or robots anytime soon if you work in marketing. Still worried? Check out this infographic from MarTech.

But what about marketing itself? Could it be outsourced or dropped altogether? It should be obvious to anyone that marketing is a fundamental of business. You have to inform people about your product or service – even if you don’t sell it. And if you do rely on selling, then marketing is essential.

And while you can outsource manufacturing, IT, HR, accounting and even sales; marketing is so intrinsically linked to a company’s business strategy that it is hard to conceive of a way it could be outsourced.

So, sit back, relax and let me set your mind at rest; unless you do something particularly stupid, you are still likely to have a job in marketing in 2019.