Can the future of content marketing be found in the past? 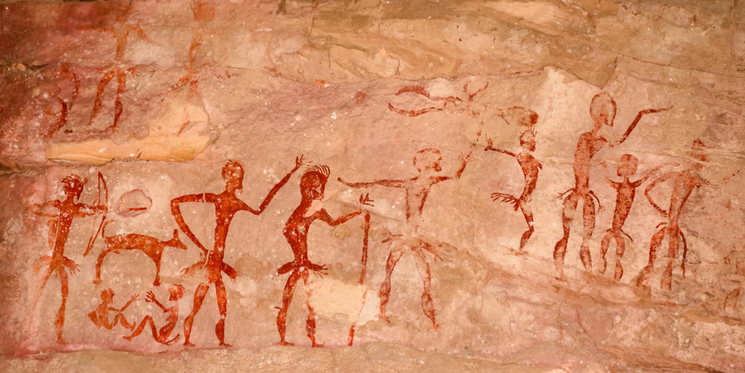 Last month was Equinet's first ever Certification Day, where the company dedicated a whole day to training.

While studying for the HubSpot Inbound Marketing certification, I was reminded that once upon a time, as little as 350 words was sufficient enough to rank well, as long as you included the right balance of links and keywords.

That’s a stark contrast from today, where the average blog post currently sits at 1151 words.

It got me thinking about how content marketing has changed over the years. In some ways, it seems as though we are worlds apart from the way things once were.

But are we really creating content that differently to how we did it in the past?

I thought it was time for a little refresh…

The earliest form of content goes all the way back to prehistoric times: cave paintings. The oldest cave paintings, found in Malaga, Spain, are thought to be over 42,000 years old. Cave paintings are believed to have been a way for families and communities to pass on information about their past.

Jumping forward to the 1600s and newspapers started to come into circulation, closely followed by magazines. Then in 1732, Benjamin Franklin launched what is often considered to be the first example of content marketing. Poor Richard’s Almanack was a yearly pamphlet Franklin created to promote his printing business.

In 1835, New York newspaper The Sun famously published six articles about the supposed discovery of life and civilisation on the moon. The unique content caused their popularity to surge and they quickly became the largest newspaper in circulation. Though the article turned out to be ‘fake news’, nevertheless, it’s a great example of the power of original content.

In 1895, Deere & Company published the first issue of The Furrow, an agricultural magazine with tips, ads, and articles. Its popularity quickly snowballed, reaching more than 4 million customers in just over a decade. The magazine is still in print today - evidence that great content can stand the test of time.

Tire company Michelin launched a guide for French motorists in 1990. And in 1933, Proctor & Gamble stepped outside of written content, broadcasting a radio soap opera sponsored by their Oxydol soap powder.

What we now think of as old-school advertising took over for much of the 1950s and 1960s.

But come the 1980s, the power of content showed itself again when Hasbro teamed up with Marvel to create a series of comics starring one of their action figures - causing G.I Joe to quickly become a household name.

Then, of course, came the internet.

The birth of the internet

As the internet became more and more mainstream in the early 1990s, it presented a myriad of opportunities for brands and organisations to connect with people in a whole new way. The term ‘content marketing’ was banded around as early as 1996, but US company Penton Custom Media is often attributed as the first company to formally use the term, in 2001.

The first major corporate blog was launched by Microsoft in 1998. In 2000, Seth Godin created what is now considered one of the most popular eBooks of all time. Unleashing the Ideavirus was published for free, which at the time was unheard of. But it paid off - the eBook has been downloaded over 1 million times.

Come 2010, content marketing had really started to gain traction, with brands producing content in the form of blogs, eBooks, and guides, as well as branching out into product-based websites. In 2012, Kraft were one of the first companies to publicly announce they would be focusing their entire marketing efforts around content. In 2013, Red Bull started making mini-movies, and in 2014, Lego released their first ever feature length, major studio film.

Not all companies have the budgets of Lego and Red Bull. And for a long while, most organisations have stayed in the realms of blogging and creating downloadable written or visual content such as eBooks, whitepapers, and infographics.

But it has become much more viable for companies, whatever their size, to branch into things like video content and podcasts. And these aren’t new ideas. Remember Procter & Gamble’s radio soap opera I mentioned earlier?

Video content is expected to make up more than 82% of consumer internet traffic by 2022. That’s 15 times higher than it was in 2017. With that, it’s no surprise that more and more companies are focusing on creating video content. Video comes with high ROI, plenty of creative potential, and can still be done well without huge budgets.

Brands and organisations are recognising the power of podcasts for allowing them to connect with their audience on a deeper level. Like video, podcasts tend to have a high ROI, and are very cost-effective to produce. Nearly a fifth of marketers plan to add podcasting to their efforts this year, according to HubSpot.

Back to the written word, and our blogging strategies have also evolved. The shift from keywords to topic clusters has forced companies to become more sophisticated in how they approach content idea generation. Pillar pages are now a staple for companies wanting to position themselves as an authority in their field. What’s more, we’re having to think about how to optimise our blog posts for voice search.

Back in 2015, The Content Marketing Institute created a documentary called The Story of Content. Although a few years old now, many of the points in the trailer below still ring true, especially this one: “You can’t rely on the media - you have to become the media.”

Over the last few years, marketers have been talking less about 'content marketing' per se and more about becoming a media publisher.

As Osian wrote in a recent blog post, “The media publishing approach is an opportunity to create an ongoing narrative about your business, your clients and their industry using a range of creative, journalistic and story-telling techniques.”

Thinking like a media publisher is all about storytelling. In a sense, doesn’t this just mean that we’ve come right back to where we started, in prehistoric times?

Stories are how we connect with people. Just like the neanderthals told their stories through cave paintings, brands have long been doing the same through media, whether via a yearly pamphlet, a paper guide, a radio show, blogs, videos, or podcasts.

Ultimately, from cave paintings, to content marketing, and media publishing, the objective always remains the same: connecting with people.

In that sense, content creation hasn't changed much at all. We just have more opportunities now to create content that will connect with our audience. Opportunities that we have to embrace.